The ‘’Wirecard effect’’ on the European Fintech Ecosystem For more than a year, Wirecard, one of the biggest European fintech companies, has been under fire due to allegations of fraud and ‘’creative accounting’’.

Not for the first time, though. Similar allegations have been posed back in 2016 by a mysterious research & investigations agency called Zatarra. The fact that Zatarra was largely unknown to the broad public did not prevent investor’s panic. The stock price of Wirecard plunged almost immediately and it took sufficient time to recover.

So, what is happening now and can it have an impact on the European fintech ecosystem?

I’ve been analyzing Wirecard for about 10 years and comparing its performance to other market players like Adyen, Worldpay, Skrill, etc. For a decade, Wirecard has been reporting stable growth year on year, launching new products, expanding to new markets and there have been no obvious red flags. When Zatarra published its report, some of the findings and the language of the report were so controversial that most analysts did not take it seriously at all. Neither did I.

However, in Feb 2019, Financial Times published the first article of what would become a series of articles posing allegations on Wirecard. Unlike Zatarra, FT is a reputable media and this time the analysts started asking themselves if there might be something they have missed. Although Wirecard has denied all claims, an independent auditor, KPMG, has been assigned and the findings are expected to be disclosed in April 2020.

What are the allegations and why they may have an impact on the M&A activity in the fintech industry?

To me, there are several points to be considered. The first one is if the transaction can be considered as  ‘’arm’s length’’, as so far, no information has been disclosed as to who is the ultimate owner of EMIF 1A.

Then, what was the strategic value of Hermes iTickets to Wirecard? At the time, Wirecard had a choice of acquisition targets and could approach Hermes iTickets directly had it been on the top of their list.

Last but not least, the tourism business of Hermes iTickets had been spun off and the company had been bundled with another business prior to being sold to Wirecard.

Strictly speaking, any price paid by willing parties in an ‘’arm’s length’’ transaction could be justified as many facts have not been publicly disclosed ( and probably cannot be disclosed due to the sensitive nature of the transaction).

For those not familiar with the terminology, ‘’round-tripping’’ is used to describe transactions designed to inflate revenues and profit as one party is sending money to the other party involved in the transaction. The later party then uses the money to purchase goods and services from the former.

It’s a bold claim and an in-depth investigation is required to prove it. Nevertheless, the information publicly disclosed by Financial Times raises questions and it comes to no surprise that the stock of Wirecard has dropped by almost one third after the announcement.

What is even more surprising is that the alleged round-tripping is related to the controversial acquisition of Hermes iTickets. 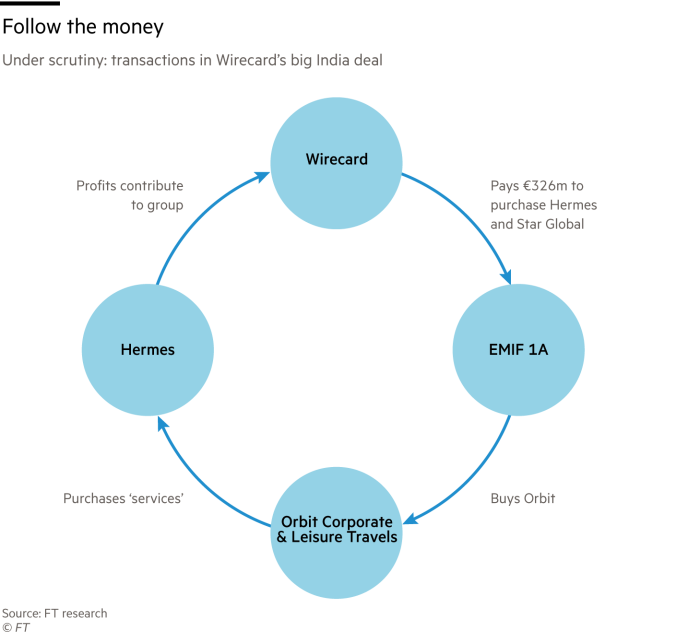 There are more allegations related to the business of Wirecard in Singapore, transactions routed via a third-party provider in Dubai called Al-Alam and so on. Although none of these allegations has been confirmed and the findings of the independent audit are to be disclosed by KPMG next month, the market reacted and the stock price of Wirecard plunged despite the good financial results disclosed by the company in its financial statements.

Why is the market so sensitive to controversial information?

One would expect that analysts and investors rely on financial data and technical analysis. Given the excellent financial results, the stock price shouldn’t be so sensitive to allegations, especially having in mind that those are not first in their kind. Nevertheless, in the months after the allegations had been published by FT, Wirecard lost about a third of its market valuation.

Even though the stock price had started to recover, in January 2020, Wirecard’s long-serving chairman, Wulf Matthias, resigned. In addition to that, Artisan Partners, one of Wirecard’s investors cut their investment from 4.5% to 3% ( by one third) and a group of small investors and family offices gathered together asking for an independent audit fearing that the findings of the KPMG audit may not be disclosed in their entirety.

May the investor’s reaction in Wirecard’s case serve as an early warning of forthcoming investor skepticism?

For a period of time, it may be expected that investors traditionally investing in fintech companies will be more conservative when evaluating investment targets. This is especially valid if the findings of KPMG’s audit prove some or all allegations published by Financial Times. The accounting practices and M&A activity of other fintech companies are likely to be looked at much closer than before.

Then, what could be the impact on unicorns like N26, Monzo and Revolut that are yet to become profitable and are heavily dependent on the next funding round?

The UK-based Revolut recently raised $500 million Series D round at $5.5 billion valuation. So far, the company has raised a total of $836 million and we are yet to see the next funding round as last year the CEO, Nikolay Storonsky, announced that the company also intended to raise up to  $1 billion in convertible debt.  Although the valuation of $5.5 billion is impressive, it has been previously rumored that Revolut’s valuation would reach $10 billion.

London-based Monzo is also planning its next funding round, partly to meet capital requirements.

Last year, N26, which just like Wirecard is based in Germany, raised $170 million at $3.5 billion valuation shortly after raising $300 million in Series D. At the time, the company reached out only to existing investors. Like Revolut and Monzo, N26 expanded to the US. Although its funding plans for 2020 have not been publicly disclosed, it’s likely that N26 will step in the shoes of Revolut and Monzo.

As some observers have already reported ‘’challenger bank fatigue’’, we are yet to see if the allegations against Wirecard will have any impact on the next funding rounds of challenger banks and fintechs in general. While Wirecard has been profitable for years and the audit findings are unlikely to result in material revenue and profit restatements turning Wirecard into a loss-making company, N26, Revolut and Monzo are yet to become profitable and their forthcoming funding rounds may be impacted by investors’ skepticism.

Are you looking to hire fintech talent? Start your 7-day Trial with Transformify now.

Lilia Stoyanov is a chief executive officer and angel investor at Transformify. A fintech and digital transformation expert, she is also a professor at Zigurat Business School and expert evaluator Horizon 2020 at the European Commission.